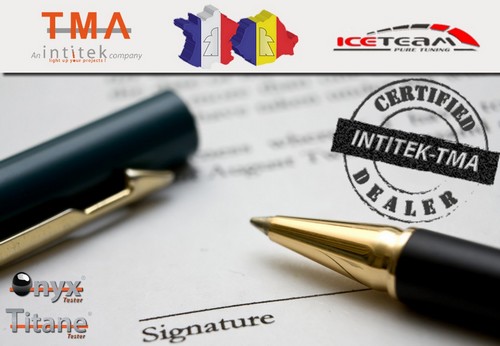 The year 2016 starts strong with a new partnership agreement that was reached between INTITEK-TMA and the company ICE TEAM. This new key player in the Romanian automotive Aftermarket represents the future of car repair with its innovative methods and concepts and its franchise network that develops on its entire territory.

Working meetings with ICE TEAM, in January 2016, At the TMA and INTITEK group's headquarters gave the opportunity to finalize this agreement and certify ICE-TEAM as an official distributor, after a thorough technical training on the test benches ONYX and TITANE.

In addition to hosting the distribution of TMA benches on the Romanian market, with sales already under their belt, ICE TEAM is also positioning itself as a partner of Intitek for IT development on the part of the engineering services we offer.